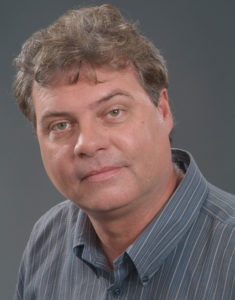 Robb Pruitt graduated from Florida State University with a Bachelor’s degree in Honors English and a minor in Theatre.  He went on to get a Master of Fine Arts degree at the FSU/Asolo Conservatory for Professional Actor Training in Sarasota, Florida.   He earned his Equity card while performing with the professional theatre troupe at the Asolo Performing Arts Center, starring in such performances as Fred in A Christmas Carol, Starbuck in The Rainmaker, Michael in Key Exchange, Clive/Edward in Cloud 9, Launce in Two Gentleman of Verona, and George in Our Town.

Immediately upon graduating, he moved to New York and joined Manhattan Punchline as a member of the resident company Brain Trust and appeared in Bad Nachos and Phantom of the Oprah.  Other professional shows at this time were The Scarecrow, Voodoo Economics (at Theatre for a New City), Change of Hearts, in Elmsford, NY, which led to his Off Broadway debut in Only Kidding at the Westside Arts Theatre.

(Also during this time he appeared in the film, The Gifted.)

After reprising his role of Tom Kelly at the Asolo in Only Kidding and starring in Rommulus Linney’s Precious Memories at Players Theatre Columbus (Ohio), he was cast in the lead of Rough Crossing at the Westport Playhouse.  The first reading fell on the day he was also cast to do a commercial for WaWa convenience stores in Philadelphia.  The director of the play would not let him miss the reading and a quick bit of math led to the discovery that he would earn more money on one day of filming a thirty second commercial, dancing with a bag of ice, than six weeks starring in a Tom Stoppard play.  He never looked back …. (Well, he has actually, but only for a moment or two when feeling sorry for himself…)

He has made a living in voice over telling you about such products as Cinemax, HBO, NBC Today Show, Ragu, Nextel, Metamucial, Fox Sports, IMAX, Staples, Oxy, Office Depot, Starbucks, Cracker Barrel, New England Aquarium, Cingular, TLC, ABC, Ragu, and that’s enough too …. You get the idea …. Oh, and he’s the voice of the Blue M&M, Frankenberry, Chip the Cookie Crisp Wolf, and Leonard the Charmin Bear.

On television Robb has appeared on the soap operas Guiding Light, One Life to Live, and As the World Turns.  He also has been seen prime time in Spin City as the Bad Good Samaritan, Law and Order, and Now and Again, and opposite Rich Little in The Presidents on PBS (which he also performed with Mr. Little onstage at the Helen Hayes Performing Arts Center in Nyack, New York..)

On the radio he has written and performed in The City Zoo (with some of the country’s finest voice over and comic performers), as well as The Less You Know About Sports, Lost America with Milo Digsby, not to mention co-hosting a radio entertainment show in Westchester County with Art and Susan Zuckerman called Forty-five Minutes from Broadway..

As a writer Robb has earned awards with such plays as A Prisoner’s Dream, which had productions in New York, Los Angeles, and Philadelphia, and also Pot At the End of Your Elbow which he starred in as well as wrote.

During the presidential campaign of 2004 he was a speech writer for both Cam Kerry and John Kerry.

His play The Cagney Room appeared at the Ensemble Studio Theatre which he wrote and performed with Jim Murtaugh.

He still acts at least once a year on the stage, originating the role of Mo Gerber in Sean Grennan’s Luck! at the Epic Theatre. His last play was Sweet Texas Reckoning at the Hudson Guild Theatre in 2016 as AJ.

He presently lives in Manhattan, where he has written two plays Flash of Green and A Very Fagola Pesach.  His two fiction books are Un-Common Non-Sense and Mother of God!